The Explore More Discovery Museum’s Cash Flow exhibit has been dedicated! In this exhibit, kids use museum currency (green balls) to earn, save, invest, spend, and share.  Here is the museum’s description of the new exhibit. The green balls create motion and excitement as kids see the money flowing though the system. YES was a strong supporter of the project from the start, making a financial commitment and generating support from several community financial partners. In addition, YES connected Explore More with John Kruggel, whose local work in economic education is funded by YES as a sponsored program of James Madison University. John and the team at JMU’s Center for Economic Education provided expertise in content creation for the exhibit.

Three projects supported by Your Economic Success have swept the state awards for 2021! In competition sponsored by the Virginia Council on Economic Education, the state judging results were:

1st place: Lauren Shifflett and Laura Sunder-Rao, South River and Elkton Elementary Schools, “Building the Elkton Zoo: Establishing a Community of Learners from the Ground Up”

State competition held by VCEE is funded by the Virginia Credit Union and the Virginia Housing Development Authority. The winners will be recognized at a December presentation in Richmond. Local awards recognition for these and other projects is set for October 11 at the regular meeting of the Harrisonburg Rotary Club.

“We have great teachers of economics in the Shenandoah Valley,” said John Kruggel, the YES-supported coordinator of local participation in the competition. Kruggel serves as associate director of the JMU Center for Economic Education, which conducts local teacher outreach as a sponsored program of YES.

The summer of 2021 was a great time for youth entrepreneurship in the local Boys & Girls Clubs. With support from YES, local programs ran mini-economies that taught lessons in economics and entrepreneurship. “The programs went great. In fact, the Teen Center ran a mini-economy several times because they enjoyed it so much,” reported Executive Director Sandra Quigg. Here are some pictures from the local clubs: 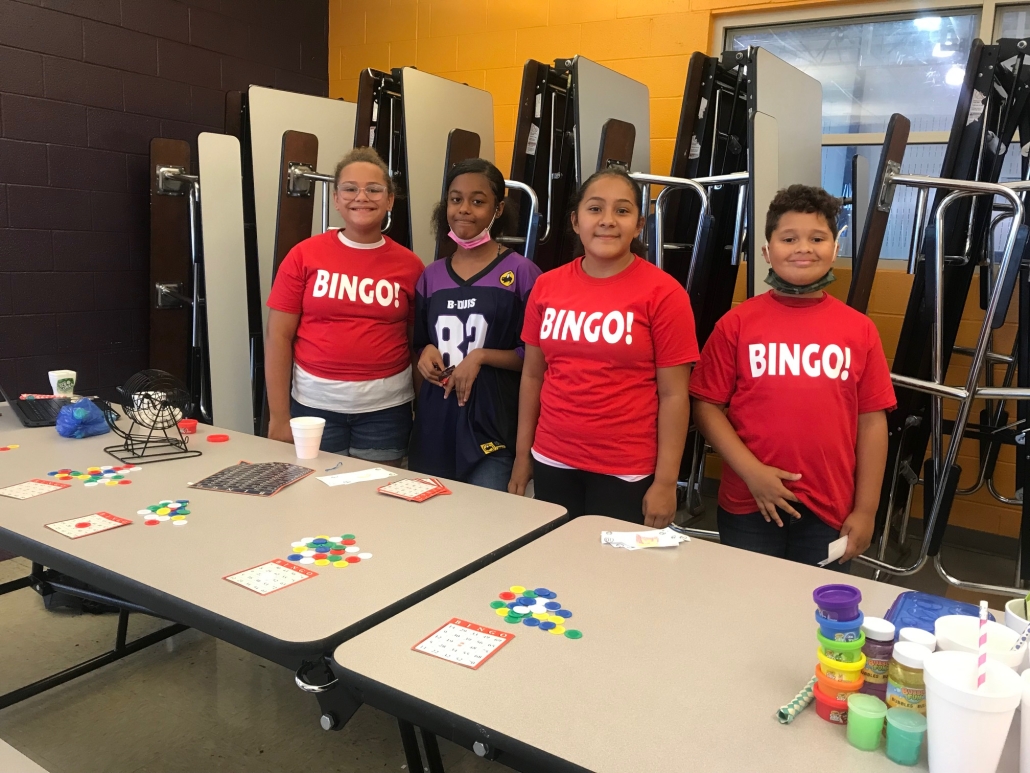 These entrepreneurs created a bingo enterprise. 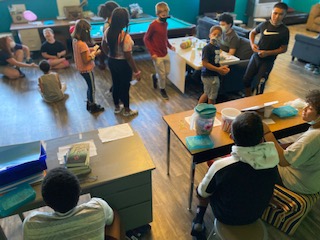 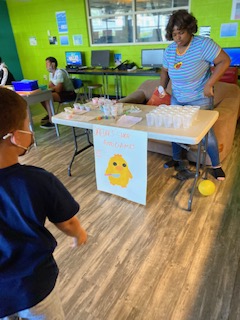 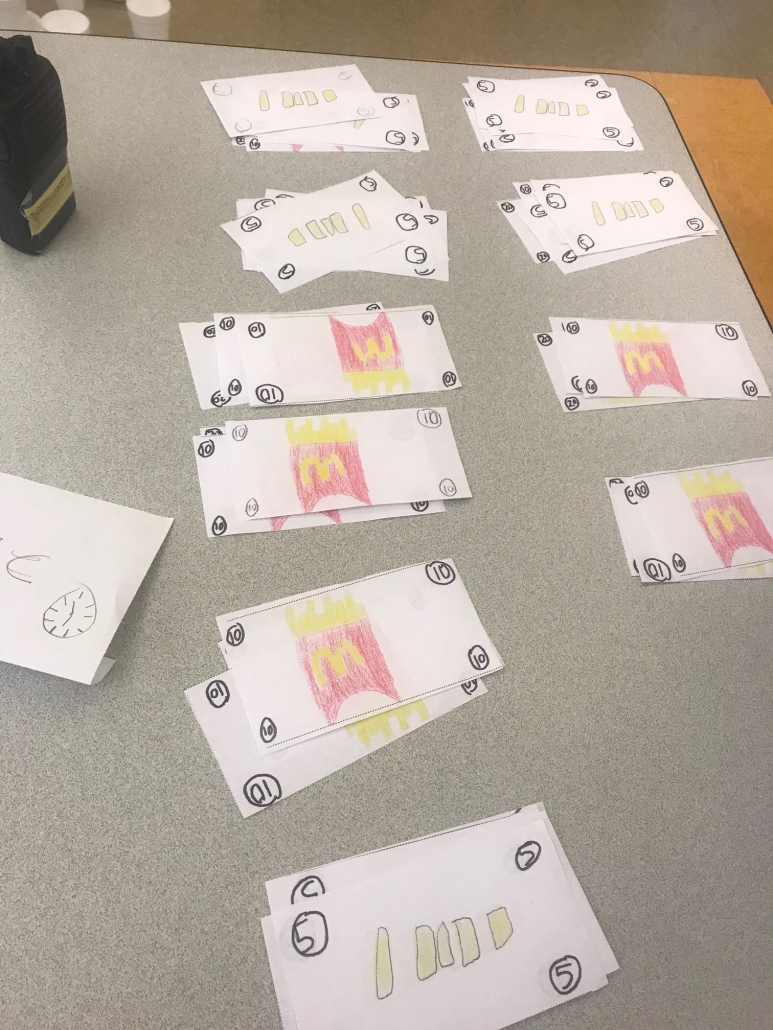 Here are Potato Bucks at the Simms Center — a youth-created currency.

Lauren Shifflett of Elkton Elementary School has won the John Morton Award for 2021 as the most outstanding elementary economic educator nationally. John Morton Awards are given annually by the Council for Economic Education in elementary, middle and high school categories.

As the winner, Lauren receives $1000 and will address her colleagues nationally on classroom technique at the “Award-Winning Teachers Share Best Practices” session of the Council’s annual convention on October 1.

The award honors consistent use of exemplary teaching techniques rather than any one project.

Members of the Harrisonburg Rotary Club will remember the day in 2019 when Lauren charmed everyone present with a description of her local grand prize-winning project, “Shifflett Superville: Soaring Together.” In that project first graders learned basic economic concepts by building a city and its market institutions with a superhero theme. Lauren addressed the club together with two of her superhero students, who were present with their masks and capes.

Lauren was nominated for the award by John Kruggel, who coordinates teacher outreach and training locally for Your Economic Success (YES).

YES promotes economic and financial literacy in the Shenandoah Valley.

YES’s teacher outreach is a sponsored program of the James Madison University Center for Economic Education, where Kruggel serves as Associate Director for Program. 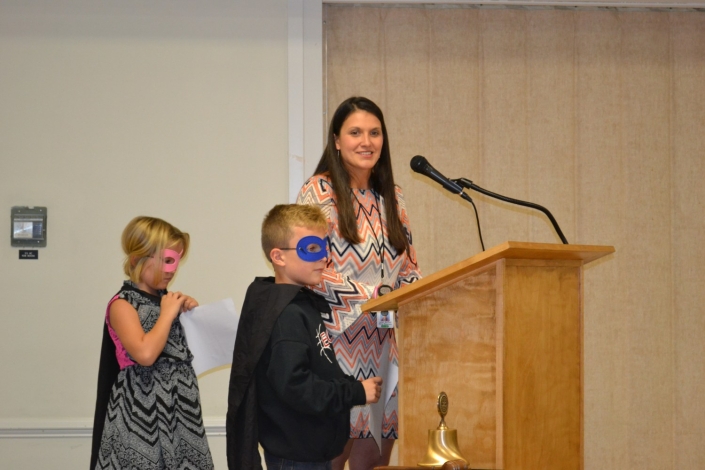 With the help of resources from YES, a classic economic education video series from the Shenandoah Valley has been restored from VHS cassettes. Now made available on YouTube, “Money Matters: The Role of Money in an Economy,” features exemplary Shenandoah Valley teachers. It premiered at Harrisonburg’s Court Square Theater in 2000 and was distributed statewide by the Virginia Department of Education.

With VHS technology becoming obsolete, YES arranged to restore the video and upload it to YouTube for free use for any educational purpose. Downloadable .PDF teacher resources were also recovered (links below). The 50-minute video has been separated into its five segments, each featuring a different teacher:

Original production was overseen by Teresa Harris of JMU’s College of Education. Videography and editing were done by Jeffrey Butler. The entire enterprise was funded by a grant from the Virginia Department of Education.

YES’s new video series “Home Front Economics” was one of the topics of discussion in the national podcast by the National Association of Economic Educators that went live December 17. The video series helps parents and students learn at home, using household items to illustrate concepts in economics and personal finance. Also mentioned was our collaboration with the Explore More Discovery Museum to bring a personal finance exhibit and supporting materials to the museum. Here’s a link to the entire podcast: https://www.facebook.com/naeenet/videos/419508942742401

Parents and kids are spending a lot of time learning at home these days. Wednesdays can be a problem in some schools’ “AB” schedules. But here’s an exciting way for parents and kids to learn economics at home — Home Front Economics!

Each video introduces an economic topic and then invites you to pause the playback and explore something in your home together. Then hit “play” again and see the wrapup that reinforces economic content.

On each video we have two elementary schoolkids and two economic educators modeling the activity. Running time is 5 to 10 minutes. Exploration can take you as far as you’d like.

Here’s the first one — have a look!

Michaela Minore and Cesar Gonzalez have won the top prize statewide in economic education competition for a project developed at Skyline Middle School.

In “Career and Personal Finance (Online Learning Modules),” students explored potential future paths, the education and skills needed for each path and the financial rewards.

The prize carries a $1,000 cash award and will be formally presented by the competition’s sponsor, the Virginia Council on Economic Education.

Minore and Gonzalez collaborated to produce and deliver both English and Spanish language versions of the project.

Second prize statewide was also won by a local entry, an in-school project by the third grade team at Bluestone Elementary School in Harrisonburg.

In “Third Grade Scarf Factory,” students worked to make and sell scarves for a good cause in a two-week cross-curricular service learning project.

Local winners were recognized at a meeting of the Rotary Club on October 5.

“These prizes are a tribute to the quality and hard work of our local teachers,” said John Kruggel, associate director for program of the JMU center. “We have about 1.4 percent of Virginia’s teachers in our service area, but they swept the top two places in state competition.”

An earlier round of local competition was sponsored by the Harrisonburg Rotary Club, Harrisonburg-Rockingham Chamber of Commerce and Shenandoah Valley Economic Education, Inc.

In local competition across all grade levels, the grand prize went to Louise Pierson of Elkton Middle School for “The City of Ember: Where Do They Go from Here?” In Pierson’s project, students created strategies for a fictional future society’s resource choices while studying Jeanne Duprau’s dystopian future novel The City of Ember.

Locally, first prize for grades K-2 was won by Kendyl Connifey and Mariela Formiconi of Bluestone Elementary School for “Needs and Wants and Helping Others.” In their project, kindergarten students used a hot chocolate stand to learn about needs, wants and economic decision making.

Second prize locally for grades K-2 was won by Michelle Hunt of Smithland Elementary School. Hunt’s “Bread and Butter for a Cause” applied students’ economic learning to help the animals at the SPCA.

First prize for grades 3-5 locally was won by Tammy May of Lacey Spring Elementary School for “Principal’s Kindness Ambassadors Working to Make a Difference: Earning, Saving, and Serving.” In May’s project, a healthy snack cart helped elementary students learn about kindness as they worked to purchase gifts for the children at St. Jude’s Hospital.

Second prize for grades 3-5 was won by Tyler Orebaugh of Plains Elementary School for his “Virtual Career Day for Students of Rockingham County Schools.

Third prize for grades 3-5 went to Carrie Guiterrez of Spotswood Elementary School for “Camp Wonder,” a 10-week club in which students created an economy of their own, learning important lessons about markets and trade.

In the middle school division, there were two local winners:

In the high school division, there were three local winners:

Emma Goehner, a 10th grader at Blue Ridge Christian High School, won first place in the statewide high school division of the InvestWrite Competition in the Spring of 2019 for her essay on Sam Walton, the founder of Walmart. This contest is the second part of the Stock Market Game™ and InvestWrite® competition and is administered by the Virginia Council on Economic Education each year. Emma traveled to Richmond for an awards luncheon hosted by the Richmond Federal Reserve on the 23rd floor. She was also honored locally at James Madison University, where all of the regional recipients were honored. See the full story on Emma.